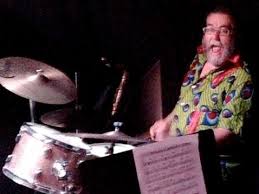 This picture says it all: loud shirts; loud drums (but not always); humour, character and a willingness to musically go where few drummers dare

Tony Orrell aka ‘the Birdman of Alkijazz’

Moved to Bristol 1973 in search of drumming work.

Played with Rockin’ Robert and various Wild Beasts/Juan Footers at Dug Out.

What was the first concert you ever went to?

streatham ice rink. kinks 1964 or 5. my sister fainted …it seemed like i was the only boy amidst a horde of screaming girls

What gear do you use?

Who was your biggest musical influence growing up?

Watch Tony and others creating some weird shit here

Remember to book your tickets early to avoid disappointment… chiefly mine!

Tickets are on sale now at:

I look forward to seeing you there.