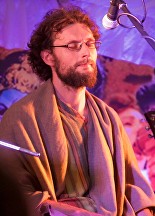 A musician with the world at his fingertips

James Watts studied oboe at the Royal College of Music (2000-2004) before travelling around the world playing with musicians from many different backgrounds, and exploring the musical worlds of different cultures as well as folk music of the British Isles.  He delights in finding unusual woodwind instruments, particularly if they have a double reed.

He lives on the Mendip hills and performs throughout the region playing in Orchestras, period instrument ensembles and folk bands, as well as groups weaving different world music elements and collaborations with story tellers and live improvised theatre.  He conducts community choirs and children’s ensembles as well as teaching woodwind, piano and guitar.  He loves the diversity that working within the field of music can bring and the unity that music can bring between people of any culture or creed.

James Watts performs throughout the south west as a freelance musician playing oboe, cor anglais, and baroque oboe with various local orchestras and chamber ensembles.  He has performed as a guest soloist with the bristol chamber orchestra, the Lucis choir, the Silton Singers and the Bruton Choral society.  He will be guest concerto soloist next year with the Frome symphony orchestra.

James also engages in a diverse range of World and folk music traditions.  He plays the Armenian Duduk, The Zimbabwean Mbira, Indian harmonium and various other folk flutes.  He uses these for exploring new musical ideas as well as weaving diverse folk elements into a rich tapestry of musical cross pollination.

Most recently he has performed at Bath Spa University following an arts council research and development project with the group “Ombiviolum”. The project was a choreographed dance piece weaving elements of folk music from the British Isles with traditional Zimbabwean music and cultural practice.