It’s tempting to say ‘me too’! ‘What?’, I hear you ask ‘you mean you don’t know?’. Well, yes and no. You see, the way these shows work is that I know the songs I’m going to sing and I know what I want to say. I also know the journey on which I intend to take us all. But the specific details will only come on the night.

For me, integrity is the key to true connection and an authentic performance. So, the best method I have found is to be in the moment and say what comes, as it comes. If that chimes with you too, then we’re in for a great evening together.

The show features some old favourites, which will be familiar to ‘Think of a…’ stalwarts. Alongside these will be some newer and/or less familiar songs. And all will be presented in a new context, under the theme of personal and environmental salvation.

So, come along. Share the love; the lamentation and the laughter. Bring an open mind and an open heart. And bring your friends too (tickets are still available).

Do book ahead if you’ve not already done so. The venue has a limited capacity and I’d hate for you to miss out. Once you’ve done so, let me know and I’ll reward you with a free album download.

Not long to go now… see you there!

Monday was the first performance of ‘Think of a Song’. No, don’t worry, you’ve not missed anything – this was the non-public part of the performance. If you haven’t fully grasped the concept of this show, let me explain… 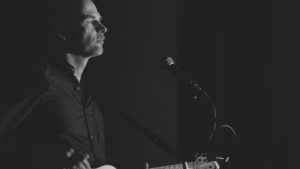 But first, I want to share my experiences from Monday’s show. This was performed in its entirety, with no breaks or edits. The space was empty, save the film crew, audio technician and myself. What was disconcerting was the sensation that, having thought the introductions (the part that will be heard on 31st May) in my mind, I than had the strange sensation of not knowing whether or not I was actually singing out loud .

It was clear that I was playing the guitar but I very nearly forgot to externalise the vocal more than once, as I had become accustomed to the voice inside my head. This was an interesting and disconcerting part of the experiment and, I have to admit, adversely affected my performance. It should not have been a surprise, since I always think of my shows as being a dialogue with the audience. Yet I came away with the distinct feeling of having in some way let myself down.

As an exploration of the role of the audience within a performance, this has – then – already yielded some significant results. All the more fascinating to see how it goes ‘on the night’. That is, the ‘second night’. Let me explain:

On May 31st, I will be performing the introductions to my songs in front of a live audience, who will then join me in thinking the songs as I play them through – silently – in my mind. Yesterday, I performed those same songs, in the same space, out loud and thought through the intros. This was all captured live on camera and digital audio. Footage from both performances will be edited together following the live show on May 31st and audience members will receive a CD of the songs they have just thought. Clear? Thought not!

Please don’t forget to book your tickets while they are still available. These can be ordered from Bath Festivals Box office on 01225 463362 or online here .