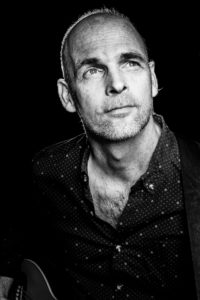 You didn’t think the fun would end there, did you?  Oh no.

This year sees the premier of the follow-up to ‘Think of a Song’, which I have imaginatively titled ‘Think of a Sequel’.

So What’s New This Year?

Well, this time around, I have enlisted the help of some first-rate musicians to fill the silences for you. Back into the breech will be the inimitable improviser/guitarist/composer/genius that is Paul Bradley. Alongside him will be the astonishing talents of drummer/percussionist/Gas Giant/wearer-of-shite-shirts Tony Orrell. And last but by no mean least is the ethereal oboist/percussionist/multi-instrumentalist/bear-foot-globe-trotter James Watts.

To say that these are three of the most affordable and available musicians I could find would be to tell the truth. But not only that! They are actually each hugely respected talents in their own field.

Paul Bradley, you will know from the first show, is the brains behind Organelles, Three Cane Whale and more besides. Renowned for his freewheeling improvisations, Paul is a hard man to pin down in terms of style or genre but you may want to think Frank Zappa meets John Williams and Pat  Metheny (and kicks the sh*t out of both of them).

Tony Orrell is notoriously one half of Gas Giants, alongside Will Gregory (of Goldfrapp fame). But he is much more besides, being the go-to drummer for jazz combos throughout the South West. Tony is an astonishingly expressive player with a flare for improvisation, which is how we originally met, back in the late 90s. Tony was commissioned to lead a series of free-improvisation sessions that culminated in Fringe performances around Bath in a variety of unlikely locations. Yours truly took part on a cobbled-together portable percussion rig and a battered flute.

James Watts is a very-much in-demand oboist, who also has a penchant for world music and a thirst for travel. He brings a multitude of influences to the party and is well-versed in the art of improvisation. James is well known in the area as champion of reed instruments among young students. He is an early music specialist, a classical soloist, producer, arranger and all-round lover of all things noisy and/or reedy.

As I go to press, I don’t have any specific information for you on Jim Gallagher, who will provide the opening performance for Think of a Sequel. However, I have known Jim for many years and seen him perform at (indeed on) various stages over that time. His songs are beautiful, ethereal, engaging and at times other-worldly, all of which adjectives apply to the man himself.

Something of an enigma, Jim is someone who very much treads his own path. Having spent time in California during the 1960s, it is very possible that a part of him never really returned. Or that is the impression sometimes given. So, as you can surmise, Jim is a shoo-in for this show. He will set the tone and we will follow…

Put it In Your Diary!

Now, don’t come running to me saying you didn’t know this was happening. The date is booked for June 6th. The venue, as for ‘Think of a Song’, will be the Old Theatre Royal Bath (details available here). This space has a certain magic to it, which lent itself perfectly to the first show and will – I am sure – do the same once again.

I will be posting updates as more info becomes available (like actual information on the other performers), so stay tuned. Once tickets are available, the links to book will go live on this site and I will be sending out emails to those unfortunate enough to be captive on my list (but with an opt-out of course).

Of course you have. Feel free to get in touch at brian@madmusik.co.uk: I should love to hear from you.

Somebody posted on Facebook the other day “What’s ‘Think of a Song’ about?”. Which is a very good question…

Like many pieces of experimental art, the interpretation will lie largely with the audience. Which is – to a large extent – the point. However, there are some themes that run through the piece. If you don’t want to know in advance, then please look away now. Otherwise, read on.

The show asks how can we break away from our day-to-day routines and certainties. How do we  allow ourselves to move beyond our own and others’ preconceptions of who we are and where our limits lie? What does it feel like to put ourselves willfully into a position of discomfort and embrace present uncertainties?

Through these explorations, is it possible to transcend our  instinct for self-preservation and expand our creative potential? And by so-doing, can we allow magic into our world?

And what’s that Kingfisher got to do with anything?…

… Come along and you’ll find out.